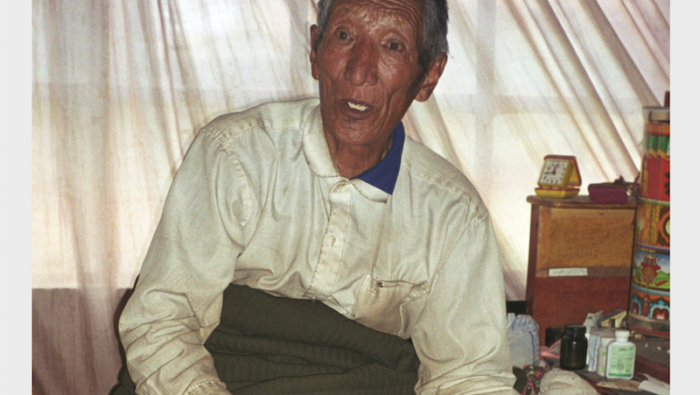 A photograph of a mediator named Xhombo, taken by Professor Pirie during the fieldwork she draws upon in this post
Methodological Musings >

An Anthropologist Among the Texts

A photograph of a mediator named Xhombo, taken by Professor Pirie during the fieldwork she draws upon in this post

My discovery occurred in the 2000s, when I was conducting fieldwork among the nomadic pastoralists of China’s Qinghai Province. I was collecting information about their feuding relations and the ways in which they resolved conflict through processes of mediation. These followed historic patterns, involving negotiation over social status and the values of lives. During several months of fieldwork, different informants described these processes to me in similar terms, which were strikingly similar to historic descriptions from the 1930s. And none referred to any texts. But in Golok, a remote area notorious for the ferocity and independence of its tribes, one of the mediators referred to his tribe’s ‘laws’. The rules he recited about truces and compensation followed the same principles as those of contemporary processes, but they were too detailed to have been applied directly and the amounts of compensation they specified were quite out of proportion to actual practice. The mediator also showed me a written copy of the rules, which had been reproduced, as he explained, from historic texts lost during the Cultural Revolution.

My initial instinct was to dismiss this text as irrelevant, as just another example of the difference between what informants say and what they do. But I made a copy and later discussed it with anthropologist colleagues. They showed me comparable examples from tribal Yemen and villages in North Africa and we realised that all these texts were interesting. We needed to ask who had made them and for what purposes and, if they did not neatly represent practice, what were they for? The texts, it turned out, told us a great deal about how the authors had imagined their communities, about matters of tribal identity, honour, and relations of protection and guarantee. They made distinctions between insiders and outsiders and indicated their authors’ aspirations to justice and the sense of a wider civilisation.

In the Tibetan case, I started by working on a translation, with the help of local assistants, who also offered interesting comments on what they though the text meant, how it related to broader social practices, and why it had been written. They also commented on the distinctive language, a subject on which I eventually wrote a journal paper. I went on to discuss the text with people from different areas, including a mediator from a related tribe. I realised that the tribesmen must have been inspired by laws created in central Tibet. Even if they never applied the rules in detail, the texts were markers of tribal identity and prestige. This shed light on historic relations between the Lhasa government and the nomads who inhabited the margins of the plateau, while the recent reproduction of the texts demonstrated a sense of independence and ideas about justice and social order, which were different from the social order imposed by the modern Chinese state.

Legal texts are often much more than simple representations of legal practice. Indeed, it is when they do not map directly onto practice that they are often the most interesting. After all, a text is a social object, just as much as a court room. It has an author, who has created it for a particular purpose and under certain constraints. People may imbue a text with meaning and use it for different purposes, all of which may be sociologically interesting. A legal text is often worth studying for more than the doctrine it presents, but to appreciate its social significance we need to set aside common assumptions that laws are only effective to the extent that they regulate or constrain social behaviour and that they primarily encode the power of the state. They often do far more than that. Anthropologists and other Socio-Legal scholars can ask about who makes texts, in national and transnational as well as local and historic contexts. Law-making is a sociologically interesting activity and legal texts deserve to be taken seriously as social objects in their own right.

Professor of the Anthropology of Law, Centre for Socio-Legal Studies, University of Oxford

Fernanda Pirie is Professor of the Anthropology of Law at the University of Oxford. She specialises in Tibetan societies, and uses both ethnographic and historical methods to study and compare legal practices and texts. Her next book, which is due to appear this year, is called The Rule of Laws; A 4,000 Year Quest to Order the World.