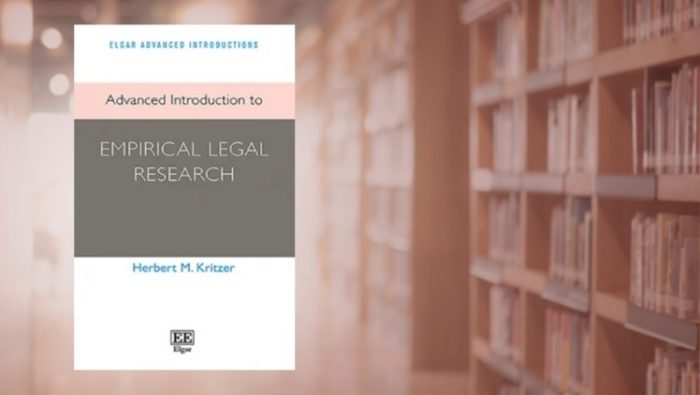 I approached the reading of Herbert M. Kritzer’s Advanced Introduction to Empirical Legal Research with great enthusiasm. Not only is there always something new to learn about methodology, it is a treat to read a book on the subject by such an experienced law and society scholar as Bert Kritzer. Though there are some notable exceptions (for instance contributions from Halliday and Schmidt and Banakar and Travers), in-depth accounts of Socio-Legal methodology in general, and quantitative and qualitative approaches in particular, remain rare in the UK. Kritzer is ideally placed to fill this gap with his decades of experience in conducting projects which draw on a range of methodological approaches. Calling this book an ‘Advanced’ introduction is something of a stretch, but at just over 150 pages this book represents an excellent appetiser in the diet of the novice and would be fitting pre-course reading.

This book is divided into three substantive sections which introduce the idea of empirical legal research, discuss some core methodological concepts and debates, and survey a selection of key questions with which empirical legal scholars have been concerned to date. The first substantive chapter aims to provide a brief history of empirical legal research and in doing so divides the story of the field into four separate phases: prior to the second world war, 1945-1960s, the growth in the field in the 1960s, and key developments after the 1970s. Much of this history will be familiar to readers; the author sketches out the origins of the US Law and Society movement in legal realism and its evolution through an increasing interest in gathering data about how the legal system or legal profession works in practice. In doing so it charts important milestones in the facilitation and dissemination of Law and Society scholarship, such as the setting up of dedicated institutions, journals, organisations, and funding opportunities. The perspective is predominantly North American but there are occasional references to pioneers, scholars, and developments in the UK. The final section outlines a number of key themes to emerge from empirical legal work on law’s institutions, the people who staff the institutions, and law’s legal subjects.

This book does not go beyond the debates that are commonly presented in any good introduction to social science methodology. It covers a range of familiar topics such as the importance of developing a clear research question, hypothesis errors, scientific standards in quantitative research, controlled experiments, surveys, secondary data sets, case studies, interviews, observation, samples, inference, and grounded theory. Given the modest size of the book, it is forced to do so in a fairly cursory fashion, but it does not claim to be anything other than an introduction. Its real value is threefold. Firstly, it maps out the field for new entrants offering a rich review of possible approaches in a neutral and balanced way. Secondly, this account is illustrated by reference to examples which draw on empirical research on law and legal phenomena; something which social science accounts of methodology rarely do. Finally, unlike many UK books on methodology it does not shy away from the language of statistics or flinch at introducing the reader to univariate description, bivariate, and multi-variate analysis or regression. The final section of the book also provides an invaluable account of a range of research questions around which US Law and Society scholarship has clustered.

I would have no hesitation in setting this book as introductory reading for a postgraduate methods courses. In addition to educating us all, I would expect it to prompt some interesting discussions about what is said and left unsaid in this account of the field. These might include the different stories of empirical legal research that might be told from a European (see Banakar and Travers above), South American, or Indian perspective (these stories have not yet been told in print); the interface between critical and empirical legal studies; or the relevance of law and economics in other jurisdictions where it has not had the same influence as in the US. There is also a more detailed historical sketch to be written of these movements from the 1970s to the present day; not least because of the emergence of exciting new work on notions of legal space, place, and time, re-assessments of the field through feminism, critical race, or queer theory, and the emergence of new methodologies which focus on visual culture or legal materiality. Finally, there is much more to be said about the very adoption of the term ‘Empirical Legal Research’ which we are told emerged at the turn of the twentieth century as distinct from the more familiar Law and Society label or the more recently formed New Legal Realism movement. There is after all, no more important time to write a unified account of a field than when it appears to be fragmenting.