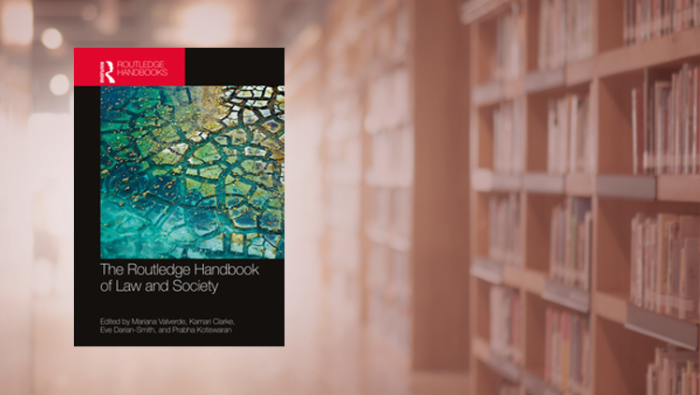 What is the state of law and society scholarship in the wake of recent disruptions wrought by the COVID-19 pandemic? From the recently published Routledge Handbook of Law and Society, I would suggest that the field is quite robust and remains relevant and inspiring.   Despite these rather challenging times for scholars, especially for Socio-Legal scholars undertaking empirical fieldwork, the Handbook is a welcome and refreshing addition to the existing corpus of law and society scholarship.

There is much to say about this comprehensive and rich volume – but for reasons of brevity, my remarks in this blogpost serve as an intellectual teaser. The editors of the Handbook (who also contribute individual chapters) are leaders and impressive torchbearers for law and society scholarship: Mariana Valverde, a scholar of law and sociology; Kamari Maxine Clarke, a scholar of diasporic and transnational studies; Eve Darian Smith, a scholar of international and global studies; and Prabha Kotiswaran, a scholar of feminism. These editors have brought together an impressive array of thoughtful and innovative scholars, some experienced and well known, and others, early-career, who engage with a range of Socio-Legal materials traversing the global and interdisciplinary field.

Divided into two parts, namely Contemporary Perspectives and Approaches and Sites of Engagement, the individual chapters offer an intellectual smorgasbord of themes that cover an array of human and non-human concerns (there is a chapter on animals). Part one comprises ten chapters that focus on a range of contemporary law and society approaches, including feminism, critical race theory, indigenous perspectives, liberalism, queer, and postcolonial studies.  Part two, consisting of forty-two chapters, examines the terrain of engagement and struggle within the law, including climate justice, food security, human security (human trafficking, citizenship, sexuality), natural resource challenges (water, property, hunger), reproductive justice, the world of finance, and artificial intelligence.

The aim of the Handbook is to interrogate contestations around the meanings of legality and the rule of law, by embracing and exploring the perspectives of indigenous, racialised, gendered, and other marginalised communities, those whom Gayatri Spivak refers to as ‘the subaltern’.

True to the law and society tradition of probing the effects of power (visible and invisible) that are embedded in law, including in legal texts, legal institutions, and legal processes, the Handbook contributors examine the many ways that individuals and communities recognise, reject, and reimagine the law. This volume takes a methodological and conceptual detour from prior law and society scholarship. It adopts a subjective approach that de-centres the state and prioritises the multifaceted forms of authority and institutions that are often in conflict with, or that substitute ‘formal’ law and state institutions, especially with respect to the subaltern. For the contributors, legal pluralism is about the contestation, contingency, and fluidity of the authority of law, which starts with the lived experiences of citizen-subjects in their many locations and conditions. In the process, the chapters provide a rich and nuanced mosaic of the various terrains of legal struggle.

The strengths of the Handbook are many – but especially the range of topics. (How likely is one to find a scholarly volume encompassing genocide, artificial intelligence, and Islamic Law, with a convincing conceptual thread?) In addition, the Handbook, with its commitment to the global project of social justice and legal equity, attempts to bridge the divide between theory and possibility by demonstrating how the seeds of conceptual tools are germinated in concrete and real-world situations. By interlinking and connecting theory and possibility, the space is created for discrete and incremental advancement in the realms of advocacy, policy, and law.

I tender one slight criticism of the volume: aiming to produce a publication that may be used as a teaching tool across the globe, one of the editors’ stated goals was to ensure the inclusion of contributions from Global South scholars, a marked change from an early period when the field of law and society was dominated by white American legal scholars. The editors have therefore included scholars from Asia and Latin America, some based in the Global South, but many at institutions in Canada, the USA, New Zealand, and Australia. The volume might have been strengthened by the perspectives of a few African scholars. Much of the contested legal terrain that this volume examines is currently playing out in real time on the continent of Africa.

Penelope Andrews is a Professor of Law and Co-Director of the Racial Justice Project at New York Law School. She also currently serves as the President of the Law and Society Association. Her scholarship focuses on comparative constitutional law, gender and racial equality, legal education, and the judiciary.