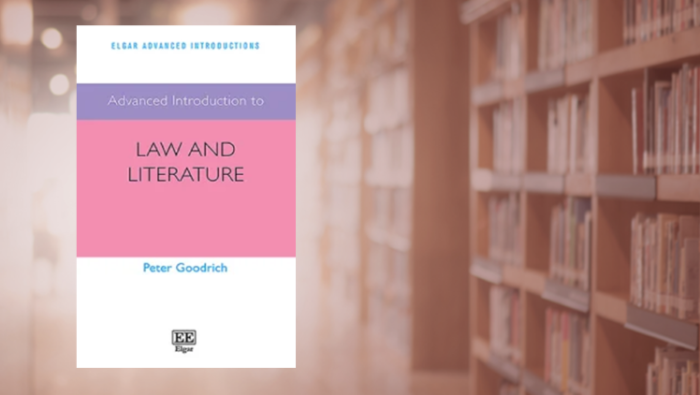 A Prophetic Foretaste of Law’s Past: A Review of Peter Goodrich, Advanced Introduction to Law and Literature

The title Advanced Introduction helpfully indicates that this is an introduction not in the rudimentary sense of that word but in the etymological sense of ‘leading into’. How many so-called ‘leading’ scholars of the law can truly be said to take us into a genuinely new understanding of our subject? Many are content to suggest new rules and new readings of rules, but Peter Goodrich is in a minority who deepen our appreciation of what a jurist is and does. In this sense, his mission to appreciate the arts and culture of law and lawyering is richly anthropological and sociological.

Although Goodrich has taken ‘Law and Literature’ for his title, his radical agenda is to critique the limits of a merely letter-bound approach to law. He writes in chapter four on ‘Legal Imaginations’ that ‘literary criticism of law…has significant jurisliterary purchase but requires expansion to include text and image, description and pictorial depictions, maxims and emblems’ (p.69). In this book, as in so much of his impressively prolific output, Goodrich does not lead us forward with reforming zeal but leads us deeper in and often therefore leads us back in time. He does not say ‘reform’ so much as ‘remember’. He is able to speak to our times and to speak ahead of his time because he appreciates present trends in the light of the past:

The exercise in history, the recuperation of a sense of the emblem as a lawful depiction, and of the visual notes of dignity as the markers of the law of images – ius imaginum – is important to ground the juridical frame and meaning of the current transition to virtual and imaginal relays of legality (p.71).

There is something literally prophetic in the calling of one who leads by ‘speaking before’, and as the preceding long quotation shows, there is something poetic in Goodrich’s prophetic mode of delivery. I choose ‘delivery’ deliberately as a word which in rhetorical terminology goes beyond the script to encompass the entire performance. As Goodrich says, ‘the thesis is that we come to law through poetry’ (p.8) which is not mere writing, but a thing performed: ‘the dialogue is a corporeal performance as well as being an abstract introduction to the project of Critical Legal Studies’ (p.12). His concern is law as we live and breathe: ‘A social body that sings together, incants together, is one that is in tune with common purposes and their affective bonds’ (p.8). In light of this I must disagree with his suggestion that poets ‘should not be legislators’ (p.23). His concern is that to legislate is ‘to reduce justice to legality’. However, if we take ‘legislation’ at its word, we find that it indicates ‘carrying law’ and is closely related to ‘translation’ of, or into, law. The art of legislating – if it is akin to carrying or translating justice into law – is surely the proper business of the poet jurist.

That note of dispute is isolated. I had to read this book closely to find anything to disagree with, which I fear makes this blog entry something of a hagioblography. There is no doubt that Peter Goodrich in style and substance will divide opinion. So do all leaders, so do all prophets, so for that matter does Marmite. It is a matter of taste, and in my assessment Goodrich adds considerably to our bill of fare and adds a deep sensory savour to the dish of law. As he notes (quoting Judge Darling, borrowing from Horace) ‘jus and au jus, law and sauce, are rather deeply connected’ (p.xii). There is no dispute in matters of taste – de gustibus non est disputandum – so the reader will not disagree when I say that I find Peter Goodrich to be perfectly ‘gusting’. I take this to be the opposite of dis-gusting, and also to be punningly useful in indicating that Goodrich and his latest book are a breath of fresh air. How welcome that is in these stifling times, and how needful for all who find themselves covered by law.

Professor Gary Watt, Warwick Law School, is a Leverhulme Major Research Fellow, National Teaching Fellow, co-editor of the journal Law and Humanities, and editor of A Cultural History of Law (Bloomsbury, 2019). His books include Equity Stirring (2009), Dress, Law and Naked Truth (2013), and Shakespeare’s Acts of Will (2016).