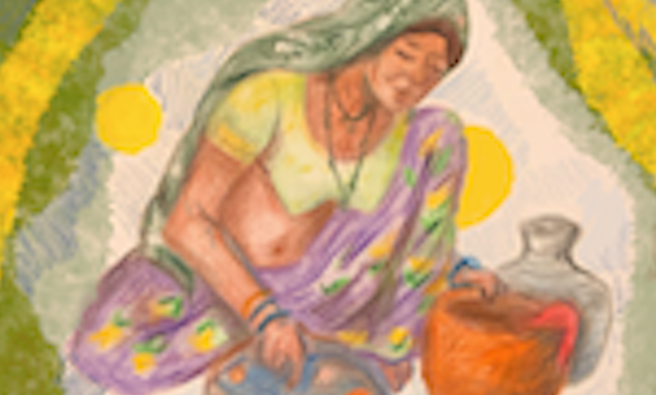 Artwork by Aastha Prasad. The drawing depicts a Dangi woman cleaning in preparation for the rituals to honour the Pedi Dev (a family deity that consists of small silver plaques symbolising individual ancestors).
Methodological Musings >

Connecting the Past and Present: An Anecdote from the Dangs

Artwork by Aastha Prasad. The drawing depicts a Dangi woman cleaning in preparation for the rituals to honour the Pedi Dev (a family deity that consists of small silver plaques symbolising individual ancestors).

In November 2020, I set out to do an ethnography among Adivasi (tribal) groups in the South Gujarat region of India. I wanted to understand the evolution of customary norms relating to kinship, land, and forests. In this blog post, I describe how stories about the past and present helped construct an unexpected sense of belonging for me during my fieldwork.

I started fieldwork in the densely forested Dangs district. “Khavla, Pevla, Nachula” was the first Dangi phrase I was taught. Translatable as “Eat, Drink, Dance”, this joie de vivre could clearly be seen in everyday life and in the rich traditions of folklore. Yet, economic realities in the Dangs entail struggle and hardship. Many families seasonally migrate every year from their villages to work as agricultural labourers in sugarcane plantations in neighbouring districts. Traditional institutions, a sense of pride in Dangi identity, and shared histories help to maintain a sense of collectivity, despite the integration of their labour power into the exploitative structures of market oriented, capitalistic agricultural production.

Seated outside his house one humid monsoon afternoon in a village in central Dangs, Somabhai recounted tales of how British troops invaded during the colonial period. “The Dangis fought so valiantly that the British never conquered us”, he said, “all this land you see belonged to the Dangi Rajas (chieftains)”. While the Rajas signed a lease agreement in 1842 allowing the British control over the forests, the Rajas remained politically sovereign. Nor had the Dangs ever formed a part of earlier feudal kingdoms. Dangis had been independent for all living memory. To Somabhai, the fact that they were never subordinated to regional kings or the British was the basis for what he called the independent spirit of the Dangis.

When Somabhai asked about my family, I told him that my parents had briefly worked in the Dangs district in the early 1990s before my brother and I were born. Talking about my ancestry and place of origin provided immediate contextual information about who I was: it also dissolved the expectation of detachment and distance he might have formed about a researcher.  Before I knew it, Somabhai, who had met my parents, was completing their story for me. He recalled that they were well into their 30s but did not have children, which was considered unusual. To remedy this, they were offered help by Janu Bhagat of Dhavlidod village, who was renowned for his extensive knowledge of medicinal plants found in the Dangi forests. Bhagats are healers and ritual specialists who have extensive knowledge of traditional medicine and are also credited with having supernatural powers. Their knowledge and heritage are passed from one generation to the next through pupillage and training, guarded with secrecy. As the story goes, my mother was given a blend of medicinal plants prepared by Janu Bhagat as a gift to enable her to have children. Not long after Janu Bhagat’s gift, my brother and I were born.

I had approached fieldwork with expectations of a dichotomy between the ‘self’ and the ‘other’, along with a binary idea of the power dynamics that would go along with my identity.  However, over the course of my fieldwork, I heard the story of my origin in many villages. Even before arriving in the field, I was already a part of the vernacular narratives and myths about the spiritual powers and indigenous knowledge of the local Bhagats. I was different, as a non-Adivasi studying in a faraway foreign university, but there was connection in our past which reinforced the lifeforce of the Dangi forests, its affective dimensions, and its sacred importance.

I had initially felt a sense of anxiety about my position as a researcher. Yet, I was put at ease by this process. My unexpected positionality allowed me to build rapport and form relationships of trust. This was significant in the Dangs where they take great pride in the autonomy of local discourses. As ethnographers, we become a part of the local context in different ways. The presence of the fieldworker can reaffirm the interests of a community and make visible to a wider world what may have remained hidden on the margins. For me, this process was intensely personal.

The vernacular histories of the Dangis, including about their Rajas and Bhagats, go through constant processes of reinterpretation and renegotiation. The past is constitutive of living consciousness. As I found during my fieldwork in the Dangs, their relationships with the forest are narrated through stories, myths, legends, and lived interconnections. These have helped the community mobilise to obtain the recognition of their traditional rights over forests from the post-colonial state. The narratives framed around the past provide crucial groundwork towards an ethnography of the present. 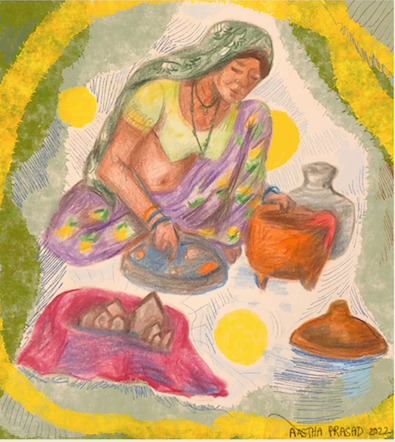 Artwork by Aastha Prasad. The drawing depicts a Dangi woman cleaning in preparation for the rituals to honour the Pedi Dev (a family deity that consists of small silver plaques symbolising individual ancestors).

Aastha Prasad is a DPhil student at the Centre for Socio-Legal Studies, University of Oxford, with a background in law and anthropology. Aastha’s research looks at the codification and formulation of Adivasi (tribal) customary law in Western India through written constitutions, oral traditions, and lived actualities.