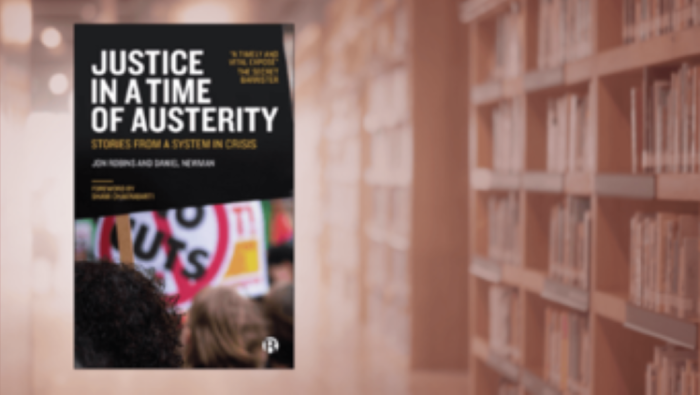 In May 2019, the UN Special Rapporteur on extreme poverty and human rights, Philip Alston, delivered his report on the UK. There was a great deal of anticipation as to what he might say. As Jon Robins and Daniel Newman’s brilliant new book, Justice in a Time of Austerity: Stories from a System in Crisis demonstrates, the dread of the government was justified. The report excoriated the UK’s programme of Austerity. Using the launch of the report as a narrative starting point, Justice in a Time of Austerity focuses upon the court system, in particular, and exposes the funding deficits, missed opportunities, and real human cost of a ‘decimated’ legal aid system in the world’s fifth largest economy.

Reviewing the impact of ‘drastic cuts’ on the ‘social safety net’, Alston invoked Hobbes’ famous description in Leviathan of the quality of life that can be expected in the absence of a decent government. It is sobering to reflect upon Alston trying to find language to describe extreme poverty in the UK, and reaching for Hobbes. His investigative visit serves as a leitmotif for the early chapters of this book, and the damning review of the state of the legal system that followed is hardly surprising after the stories revealed in this compelling and important contribution to the literature. The book’s central idea is to share experiences of the legal system recounted by persons approached by the authors in food banks and shelters, as opposed to contacts and clients recommended by lawyers. The impact of this intriguing methodological choice is to create the sensation for the reader of – if not experiencing the impact first hand – then of viewing legal reforms from perspectives that are too seldom shared. A collaboration between a journalist and a legal scholar, the book reads as an interweaving of stories, from a reporter’s perspective, against the backdrop of legal changes over the past fourteen years. The views of court workers, legal aid barristers, and clients are woven together seamlessly with the authors’ explanations of the funding cutbacks and simple poor choices that led to the suffering being described, whether it is the inaccessibility of courtrooms, the dreadful levels of pay in legal aid, or the growth in homelessness. It is both a manifesto, and a collection of narratives.

A sense of disconnect underpins the accounts of the government’s responses to criticisms, and faltering efforts to redress the problems. Initiatives that failed to achieve their aims are defended frustratingly, sometimes simply because of arrogance, and, other times, because of the fear of confronting rapidly worsening conditions. As a case in point, far from being appalled by his findings, Amber Rudd complained about Alston’s assessment. The fallout from badly planned projects is shocking. For example, far from regenerating East London, the post-Olympics redevelopment augured soaring levels of homelessness in the surrounding area. Many of the people who sleep rough there also work in the shopping centre – so, yes, jobs were created – but they cannot afford the rents that skyrocketed in the wake of the Olympics. The impact of Covid on this already fragile situation is yet to be fully revealed, but one imagines that the cost in health outcomes for Austerity’s already vulnerable victims will have been high.

The skill with which the authors interweave background information like this, with first-hand accounts of the struggling legal system, is masterful. The aim of this book is not simply to reveal the impact of Austerity on the legal system, and persons living in poverty, although it does a brilliant job of that. The authors endeavour also to offer a sense of a way forward. As such, the final chapter explains how clarifying the meaning of the phrase ‘access to justice’ is an important next step. For every observer who might have thought, ‘well, let us sort the court system after we deal with hunger and homelessness’ – such that reforming the legal system belongs on a list of priorities, but not necessarily at the top – one point is made resoundingly clear: access to justice means access to basic human rights.

What next? The authors emphasise that justice needs to be funded, ‘(hyper)local’, and accessible on a level playing field. Thanks to their book, the urgency of these reforms cannot be denied.

Ann Mumford is Professor of Law at the Dickson Poon School of Law, King's College London. She publishes in the fields of law, fiscal institutions, and equality.