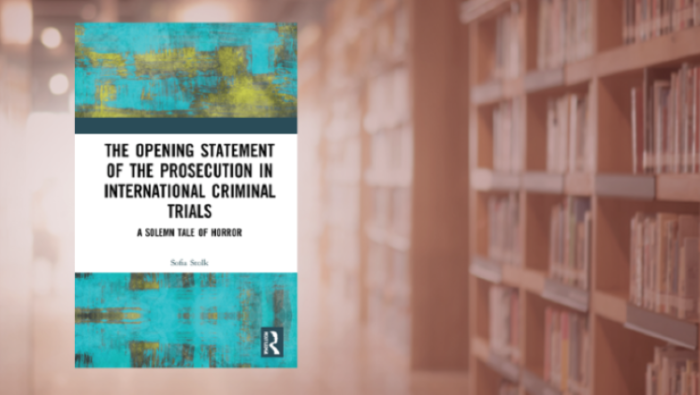 How to reconcile the local and the non-local, the judicial and the rhetorical, the human and the inhuman? Sofia Stolk’s book, The Opening Statement of the Prosecution in International Criminal Trials: A Solemn Tale of Horror, builds on a body of work analysing the documentary practices and transcripts of International Criminal Court cases, such as Werner (2014), or Meijers and Glasius (2013), and examines the content and the context and function of the opening statement in international criminal trials. Stolk’s work does not claim to amount to a novel approach but instead, as the author puts it, to proceed with ‘a rather traditional literary dissection of topics’ (p. 16). This is more modest than is justified, in that the work contributes to a focussed discussion of opening statements, which she correctly describes as a ‘taken-for-granted’ practice (p. 3).

What emerges is an elucidation of how what one may assume to be a functional, routine part of a trial can be considered to be a complex creation run through with language balancing contradictory requirements. She argues that the opening statement is ambiguous: ‘political and non-political, argumentative and non-argumentative, a mere introduction as well as a crucial roadmap’ (p. 2).

Stolk is a researcher in Dispute Settlement and Adjudication at the T.M.C. Asser Institute and an Honorary Research Fellow at Liverpool University; this book builds upon her PhD thesis from 2017 carrying a similar title. Her outlook is that of a researcher who, (as comes across from the enthusiasm of the chapter on maps), has an interest in images about, and use of visual material in, international courts and tribunals. The book is drawn more widely but the theme of tensions between layered meanings in international courts runs through it nonetheless.

The book consists of four focussed chapters bookended with a chapter about opening statements, and a concluding discussion. Each chapter scrutinises an aspect of the prosecution opening statement, based on quotes from transcripts of international criminal trials including the International Military Tribunal (IMT) (1945) onwards, the International Criminal Tribunal for the former Yugoslavia (ICTY), and the International Criminal Court in the Hague. Hence the themes include the representation of the history, and validation of international criminal law in the ‘auto-histories’ in opening statements. In particular, Chapter 2 focusses on the debate around self-construction of international criminal law where Stolk traces the way in which successive trials have built on one another’s narratives. In later chapters she discusses maps and oral descriptions of locus and landscape, representations of victimhood, and of ‘perpetrators’. If one has any criticism it is not as to structure, but given the focus on what is said and presented in court (with some quotations), appendices with extracts of transcripts would have been a useful addition. So too would have been clearer illustrations of maps and plans and perhaps appendices with resources to save the reader needing to access external sources. That being said, the chapters are usefully footnoted with references to transcripts and to other authors’ work, which add to the value of this book significantly.

Leaving aside the well sourced nature of the work, in a more substantive sense the approach taken emphasises tensions within the presentation of material in court under each theme heading. I found that an engaging approach. For instance, in discussing how ‘the perpetrator’ (as the accused is referred to in ICC cases) is represented in the opening statement, Stolk draws out how prosecutors simultaneously attempt to imbue ‘perpetrators’ with human vices, character flaws, and tendencies, whilst seeking to separate them from what the actors in the ICC are characterised as seeing as ‘civilisation’, by talking in terms of inhuman (perhaps superhuman?), and unimaginable evil. In the chapter on maps and landscapes she draws out a further juxtaposition: on the one hand, she illustrates how maps are seen as neutral, informational objects confining the imagination and keeping focus on the ‘facts’ but on the other, as stimulating the imagination of the viewer by illustrating the dramatic scene (for example a coordinated attack on a village, surrounded on the map depicting forces and attacks in visually abstract terms).

This book will appeal to postgraduates and researchers interested in the analysis of language in criminal trials, especially international criminal trials, and the history and evolution of the validity of such trials in part by way of ‘bootstrapping’ their own historicity.

Victoria McCloud is a student at CSLS. She is a Visiting Professor at Tashkent State University of Law, Uzbekistan, and an Associate Fellow, Global Network on Extremism and Technology, King’s College London University. To earn a living when not on academic things, she is a judge in the High Court.