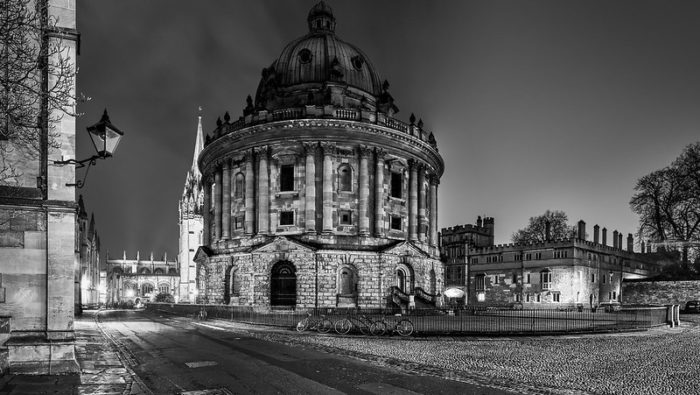 Gendered Spaces and Divided Streets: the Policing of Women by the University of Oxford

Radcliffe Camera by night by thriddle

Women’s history in Oxford seems to be subsumed in narratives that mark and celebrate their arrival with the introduction of the university’s first women’s colleges in the 1870s. This is an inaccurate and limited view, as the interactions of townswomen with members of the university go much further back than the 19th century. These interactions have also determined a gendered division between public and private spaces and underpinned the long history of policing women not only in the city of Oxford, but also within the university.

Historically, the masculine (and priestly) ethos of the university meant that although some colleges had female founders, most women were excluded from their physical spaces until the late 19th century; even at that time, most female students were not allowed to enter the premises of men’s colleges. This also meant that women of the town were initially excluded from a dominant form of income in the city of Oxford, both as scholars and as workers. With new paying students from wealthier backgrounds arriving from the 15th century onwards, some female servants eventually found employment with the colleges, often working as laundresses. However, these roles were few and coveted, and women working in the proximity of scholars were selected cautiously, and always treated with suspicion.

This suspicion was linked both to the quasi-monastic lifestyle enforced on the students of the university, but also to the other dominant source of income that connected townswomen to the scholarly institution: prostitution.* The combination of masculinity, wealth, and youth thus created a unique and lucrative market for prostitution. Sex work was also part of the work cycle of many women, who regularly moved between prostitution, other wage labour, and marriage. While prostitution was a common practice since at least the 15th century, by early 19th century, the city of Oxford’s population was roughly divided between: 25,000 inhabitants, 1,500 students and between 300 and 500 “common prostitutes”.

A contemporary historian qualified Oxford as ‘the centre of a wide circumference of vice, the primal wave propagating itself till lost in the general ocean mass of England’s pollution’ (“Public Morals: Prostitution in Oxford,” Oxford Protestant Magazine, I, No.3, 1847: 112). This frantic tone motivated the university authorities to oversee the public spaces of the city of Oxford through legal and practical means. Initially, the Vice-Chancellor utilised the criminalisation of vagrancy to imprison large numbers of presumed prostitutes in the city jails at the Oxford Castle. Yet, when the law changed in 1826, the university decided to take over the task of prosecuting suspect women, a group that the local law enforcement did not consider such a pressing threat. The Night Watch was created as a private police force on the university payroll, with full jurisdiction over the city of Oxford curfew, from 9pm to 4am. The suspected prostitutes were now kept overnight in underground ‘rooms’ below the Clarendon Building and presented to the Vice-Chancellor the following morning to hear their sentence. This meant that the university had its own ‘prison’ for suspected prostitutes, a practice that continued from 1826 until 1906.

The Night Watch had the power to enter any house where a student might be caught with a woman, thus increasing the police’s power of harassment, and placing the whole city under university surveillance. Because of these special regulations, the presence of women in public spaces became more criminalised in Oxford than in most other places in the country, with the university jurisdiction diverging from more relaxed national laws. This alternative legal regime had a direct impact on female presence in the public spaces of the city and townswomen’s respectability was determined by the time of the day. The risk of being imprisoned also placed a stronger emphasis on women’s external appearance and behaviour. The case of Ann Crotchley, ‘the young woman who was so inhumanly murdered lately in that city’ (p.18), shows how victim-blaming was often used in instances when violence was exerted against women on the streets of Oxford.  Crotchley was found bleeding on Blue Boar Lane after ‘drinking brandy, handed to her through the bars of one of the windows of Brazen Nose college’. Later reports blamed the deceased for her own demise, and no-one was ever tried for the crime.

The activities of the Night Watch and the university’s special policing powers all aimed at labelling women in public, controlling their bodies, and segregating them spatially and socially. Additionally, the criminalisation of the relationship between male students and women of the town fuelled the arguments of those who feared the immoral consequences of women coming into higher education and delayed the admission of female students into the university. When the first women’s colleges opened in 1879, female students were under strict chaperoning rules and had to constantly regulate their own movement in the city, as well as their physical appearance. Women of the university strove to obtain a ‘nice girl’ status which would further increase their separation from townswomen, while diffusing the suspicion of the proctors and preconceptions of the male scholars and students. Contemporary male students would describe their female counterparts as ‘invisible’, an underlying standard for acceptable female presence at the university, indicating the conditions attached to challenging the gendered geography enforced on women.

The story of Oxford’s Night Watch and sex workers might come across as an unusual tale of the past, evoking the elitism, gender segregation, wealth, and town-gown divisions of a previous age. At a time when women are still fighting for their right to go out at night safely, without shame and too-often with tragic consequences, the history of the policing of women’s appearances and the places they visit remains all the more relevant. Both past and recent events show that even today objections to women’s behaviour and appearance on the streets – and even their right to be there at all – remain all too common. The long history of the criminalisation of women in public places, their victimisation, and unequal access to streets reveal the intersections of masculinity, economic precarity, and privilege.

*There is an ongoing debate about the use of the term ‘sex work’ instead of ‘prostitution.’ Though the latter only emerged as a new vocabulary in the 1970’s, it reframed the debates about the problems associated with prostitution by focusing on the individual rights of those who engaged in it. Sex work implied a consensual exchange between adults, while prostitution would denote violence, the absence of choice, and involved minor and/or trafficked individuals. In this piece, sex work is taken as one among several economic opportunities, but the policing of prostitution in Oxford effectively criminalised sex workers.

Olivia Durand is the co-founder and director of Uncomfortable Oxford, a public engagement with research organisation, active in the UK and beyond since 2018. Durand holds a DPhil in History from the University of Oxford and is currently as a postdoctoral fellow of FU Berlin, working in the field of comparative settler studies and global history. Durand is also a senior research associate of the Institute of Historical Justice and Reconciliation.