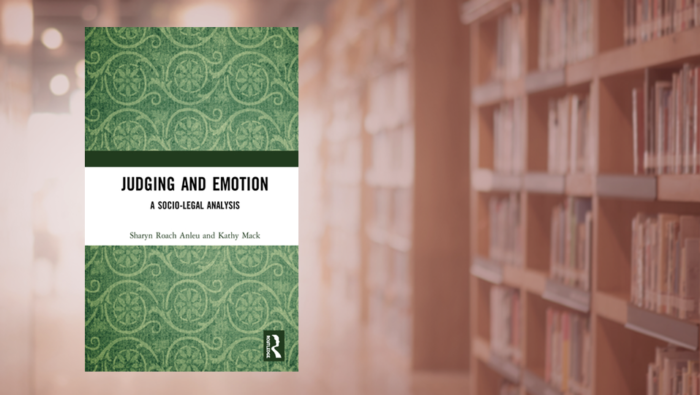 Australian scholars Sharyn Roach Anleu and Kathy Mack have been leaders in the field of judicial research for many years. Drawing upon that work Judging and Emotion: A Socio-Legal Analysis is not only a stunning empirical exploration of the everyday emotional landscape of the judiciary in the lower courts in Australia, but it is also a masterclass in doing empirical Socio-Legal research.

Roach Anleu and Mack take the reader through the looking glass of ‘judicial dispassion’ to explore the feeling rules and everyday emotional work that judges perform in the courtroom. The data was generated by way of interviews with judges, many hours of courtroom observations, and surveys.

Three interrelated chapters make up the core of the analysis of the empirical data. The first takes as its point of departure the way judges frame, negotiate, and perform the role of the detached and dispassionate decision maker; what the authors describe as ‘a foundational legal value’ of ‘impartiality’. A particular focus of the chapter is the space within ‘impartiality’ for judges to deploy and perform empathy. The following chapter investigates the way judges manage their own emotional experiences and performances of emotions in the courtroom. The third focuses on the work that judges do to manage the emotions of others in the courtroom. The chapters offer a fascinating insight into the toolbox of techniques, tactics, and strategies that judges use.

Common to all three chapters is the researchers’ sensitivity to the complexity of the courtroom context in which their research subjects operate. The careful selection of data allows the authors to shine a light on how judges respond in the intense, complex, and dynamic setting that is the courtroom.

It is against this backdrop that showcases the importance of emotions in the courtroom that Roach Anleu and Mack explore the guides, codes, and institutional mechanisms that seek to set the parameters of and regulate good judicial practice and behaviour. In sharp contrast to what they discovered by way of interview and courtroom observation their investigation finds little reference to the feeling rules and emotion work that their empirical research revealed as a central part of judicial practice in many courts. This is not as surprising at it may at first seem. In part these codes and mechanisms perform an ideological role; generating and institutionalising the founding myths of the legal tradition that informs the institution. There is also a need for caution when dealing with legal discourse. As others have noted, lawyers are gifted translators; translating everyday matters into legal categories. So the categories that populate the regulatory regime may be capable of accommodating what appears to be formally absent. Otherwise there is a strong temptation to conclude that the regulatory regime is built upon a profound miscognition, if not delusion, about the nature of judicial labour.

The authors offer another important insight into the nature of regulation. The generation and codification of feeling rules and good practice is not so much absent from professional formation and regulation but takes place by way of the many informal mechanisms that work to transmit judicial cultural from generation to generation. But there is potentially a cost to this system of informal institutional formation and self-regulation. Its operation may at best remain obscure; operating in the shadow. At worst its failings and any negative impact they might have on the delivery of justice and on the experience of justice of those who are the objects of justice are largely rendered invisible, potentially unchecked and unaddressed.

Judging and Emotion is a milestone in research that examines emotion in the practices of the judiciary operating within the rule of law democracies. It is a must read for anyone interested in the interconnection between law, justice, the judiciary, and emotions. It is an invaluable study of the skills and knowledge a good judge needs to have and to put to work in the courtroom. It remains the case that in other jurisdictions empirical studies of the judiciary in general and of the emotional work judges do in the courtroom are in need of urgent development. I hope it will inspire others to take seriously the empirical study of the judiciary in general and in particular the emotional landscape in which they operate and the emotion work they perform.

Leslie J Moran is Emeritus Professor of the School of Law, Birkbeck College. A key theme of Leslie’s research has been law and visual culture. In 2021 Routledge published his study Law, Judges and Visual Culture. Further reflections on the methodological challenges of undertaking Socio-Legal research into the visual culture of law can be found in the Journal of Law and Society 2021. Other publications cover his research interests in judicial diversity, criminal justice, and hate crime. Leslie is developing his interest in visual culture through painting and drawing; see his Instagram account @moranlesliej for more.