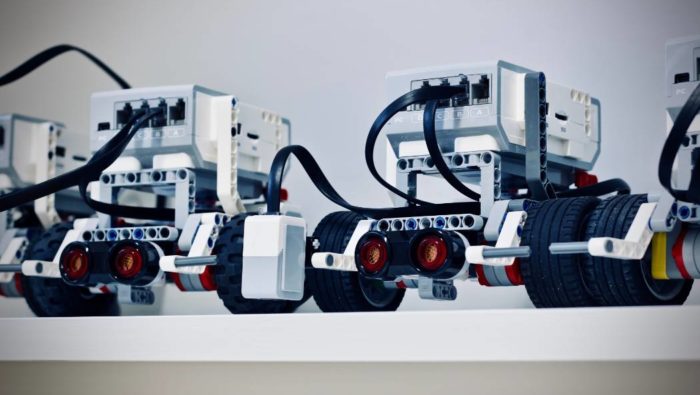 ‘Lawyer’ in the Lab: Navigating the ‘Extreme Robotics Lab’ as a Socio-Legal Researcher

As their inanimate, suspended robotic limbs sat behind their respective Perspex safety shields, draped in light blocking sheets, the ‘extreme robotics lab’ introduced itself as a foreign, highly secured land, distant from my natural habitat of mahogany bookcases and magnolia walls in the law school. The purpose of my visits was an attempt to ‘discipline hop’ from the law school to the lab, to achieve ‘environmental solutions’ as part of a UKRI NERC project. My task was to learn about robotics in order to devise a policy brief on the potential liabilities that the automation of the disassembly of electric vehicle lithium-ion batteries (LiBs), which aim to aid recycling, pose to circular economy. In this post, I discuss the methodological insights and dilemmas I encountered when ‘discipline hopping’ in the context of my research tackling climate change issues.

With limited knowledge of robotics, my initial entry into the robotics lab involved approaching it as an inquisitive outsider, observing the typologies, contexts, and usages of different forms of robots. People working within the lab vary, from research students to Professors working on different aspects of robotics. I interviewed two PhD researchers, whose research focusses on the for recycling LiBs. As a lawyer amongst scientists, it was crucial for me to maintain an open mind during these interviews. It was also important to enter this field with a sensitivity to the willingness of researchers in the lab to allow a legal researcher onto their turf. Showing this understanding, for example, by respecting lab space and protocol, was especially important given the focus of my visit: assessing the liabilities of the technologies in practice. This meant reserving a critical eye towards the technology when present in the lab in order to preserve a relationship and sense of trust with the scientists. One of the results of presenting as a legal researcher who was curious to know more, was that some interactions in the lab became one-sided. I often remained quiet and kept my ideas and views to myself to save time and preserve the relationship, not risking rapport and trust by divulging any critical views and causing offence. Upon reflection, a more transparent approach to my views may have allowed for engagement into a deeper critical enquiry.  However, the shared overarching motivation of meeting climate goals between myself and the scientists acted as common ground and gave a sense of legitimacy for my presence in the lab.

During the interviews, I also noticed that my style of questioning evolved from an investigative to interrogative style. The investigative approach focussed on acquiring the fundamental workings of robotics, such as their operation and function. The interrogative style took the enquiry deeper, by questioning why the technology operates and functions in the way it does in practice. Asking these questions facilitated the transition in my learning journey from a broad knowledge base of robotics to a more informed view and saw the relationship between myself and the scientists flourish as I delved deeper into the process. The key was to position my questions in a way that made sense to the researchers in the robotics lab, while developing my understanding of their work. However, communication issues emerged when translating the terminology used by the robotics researchers, as I understood and spoke about the scientific terminology through the filter of my ‘legal mind’. For example, whereas for me, the word ‘compliance’ meant an adherence to a body of rules in law, within the robotics lab this term meant the level of force necessary to comply with a surface. This difference in meaning resulted in time being spent educating each other on the disparities in our understanding. Refining our understandings of these terms and constructing meaning together required patience from the roboticists to provide a lay explanation. As an interviewer, it required I keep an open mind and probe further into areas I wished to deepen my understanding of, whilst also holding onto an ability to think critically about them.

The benefit of these conversations and exchanges was a form of advocacy, informing the researchers in the lab about the ethical dilemmas that technologies implementing AI might pose as I shared my legal perspective. This took the form of directly raising such concerns during our interviews as and when felt necessary, such as at particular junctures when discussing the capabilities of the technology, and the directions in which they may be taken in the future. Voicing these concerns felt especially important where ethics might not have been considered by the roboticists in their research programme. In this sense, creating shared meaning meant that my understandings influenced and shaped my interviewees’. For example, our conversations prompted the robotics researchers to consider implementing legal perspectives into the design of automating disassembly. Here, discipline hopping became an iterative and deeply interpersonal process, where my own positionality, as an advocate for policy making to meet climate goals, shaped my interactions with interviewees and the evolution of concepts within the lab itself.

My hopping between worlds also allowed for preservation of critical judgment, in which the roboticists, fully immersed in the social world of the lab, did not have. During my project, I had anxieties that ‘discipline hopping’ would encourage an obfuscated view of technology as a result of the influence of learning from the researchers working with the technology so closely in the lab. I was concerned that seeing and experiencing through the eyes of those within this social world would hinder my ability to think critically about the ethical implications of technology. Although in-situ note taking and hands-on testing of equipment in the lab enabled contextual precision in transcription of robotic principles, the interview sessions were intensive in terms of processing the content in a multisensory environment. In this sense, I found writing the policy brief outside the lab space conducive to creative taxonimisation, where moving to a familiar space in the law school allowed me to critically think about the issues presented without distraction of lab stimuli.

The influence of the learning environment in the context of emerging technologies and how to navigate this as a Socio-Legal researcher pose both insights and questions. Such questions include how to develop continued engagement and percolation of knowledge through incentivised collaboration; improve effectiveness of communication between researchers in different fields; examine how different spaces can be utilised, e.g. whether to create structured/unstructured environments, scripted/unscripted meetings; and create trusting relationships and shared meaning across disciplines. Methods such as ‘discipline hopping’ will be critical to understanding emerging technologies in future research and may well lead to a web of networking relationships as collaborative forces. In this way, what were once ‘foreign’ environments to Socio-Legal studies might become learning hubs for all.

Angela Eggleton is a Teaching Fellow and PhD at Birmingham Law School, The University of Birmingham. Angela conducts interdisciplinary research focussing on the intersections between law, emerging technologies, and the environment, with a primary focus on the regulation of electric vehicles and electric vehicle batteries. She also looks at the regulation of AI, robotics, and automation and will soon be publishing a policy brief in this area. Angela organised and led an interdisciplinary conference in this area in March 2022, in which industry experts, government, and academics from across the University attended. Angela can be contacted at: a.eggleton@bham.ac.uk