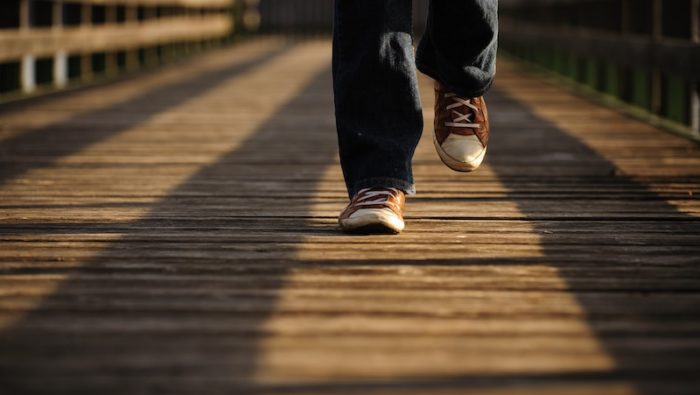 This post is part of a series profiling recent pieces in a special methodology edition of the Journal of Law and Society.

‘To be a place, every somewhere must lie on one or several paths of movement to and from places elsewhere. Life is lived along paths, not just in places, and paths are lines of sort. It is along paths too, that people grow into a knowledge of the world around them, and describe this world in the stories they tell.’

Movement is a mundane method – an embodied tool for working through knotted thoughts and diverting from mental pathways seemingly blocked. When nothing sticks to the page, and the pressure becomes too much, I move my body – wandering the neighbourhood, swimming laps at the pool, and following the ripples of the riverbank.

The legal system plays a central role in the spatial ordering of movement. The law would intervene, for example, if I cycled up and down the shopping aisles and not the city’s streets, whilst the lifeguard’s whistle draws attention each time a child transgresses the demarcated lanes to retrieve an inflatable. Law polices the rhythms, tempos, and forms of our bodies in motion. Legal (im)mobilities are particularly noticeable in urban contexts where issues of law and movement play out across multiple scales, engage with a portfolio of regulations, policies, and practices, and produce Socio-Legal atmospherics.

It is more common, perhaps, to think of law as regulating movement. But if law is inherently mobile, what can movement as method help to reveal in empirical Socio-Legal Studies?

My doctoral research experimented with mobile methods to study law in the everyday of civic space. Originally, I planned to conduct a case study on how legal certificates document gender, kinship, and parenthood. My research questions shifted, however, when I discovered that Kent County Council were leading a policy change which placed civil registration in community hubs. This decision had created a novel form of legal architecture, in my local area, with births and deaths being registered on the mezzanine floor of the Beaney House of Art & Knowledge – a library, museum, art gallery, café, and tourist information desk in the heart of Canterbury (UK). My curiosity in this multi-stranded civic space, where legal and bureaucratic activity had not been explicitly designed for, but which nonetheless surfaced in fleeting moments, required a change of direction.

The mobilities turn emphasises movement as a world-making process. Mobile methods include observations of movement, space-time diaries, auto-ethnographic insights into movement, and empirical inquiry at liminal sites. Importantly, then, mobile methods can involve, but are not limited to, attending to the physical and embodied aspects of movement.

My research developed movement as Socio-Legal method to explore how bodies, materials, concepts, and administrative processes are set in motion by the state’s documentation of the life course. I paid attention to the way legal and non-legal signs were orientated towards an imagined body in motion, mapped the legislative framework onto walks to and from my fieldwork site, and traced the law of civil registration back in time to explore movement as an evolving technology of governance. These diffuse methods were bound together by orientating my legal research towards the empirical observation that the social and material world is in flux – an observation that helped to uncover novel histories, concepts, and empirical insights. Walking to and from my fieldwork site, for example, led back to the legislation, and to the continuing importance of locality, place, and the sensory in bureaucratic processes. Movement as method, then, provided an embodied approach to dealing with the messiness of empirical legal research – a way of following law along pathways and being led by the unexpected.

A key challenge, however, was that pathways often appeared to lead me away from law. The more I came to focus on the Beaney’s atmospherics, and the entanglement of lines of movement in the building, the more that law appeared to be lost. I wanted to study law in its multi-sensory environment, given how registration functions as an extractive tool of governance, but where was law to be found in the sound of social chat, the smell of coffee, or the ringing of a check out machine?

Movement as method expands the Socio-Legal toolkit for engaging with questions of law, space, and the built environment. I argue that as mobile methods are designed to address a social and material world in flux, they are particularly helpful for unsettling assumptions made about the place of law in everyday life. These are issues that I address further in my article in a special supplement of the Journal of Law and Society; there I discuss some of the challenges of journeying with law, particularly in architectural settings where legal activity surfaces in transitory moments, such as at the Beaney.

Jessica Smith is a Research Associate on the ESRC-funded Future of Legal Gender project, based at King’s College London. Jess has published her research in the Journal of Law & Society, Sociological Review, and Conversation and has research interests in state documentation, legal geography, and mobility. She completed her PhD at Kent Law School in February 2021.