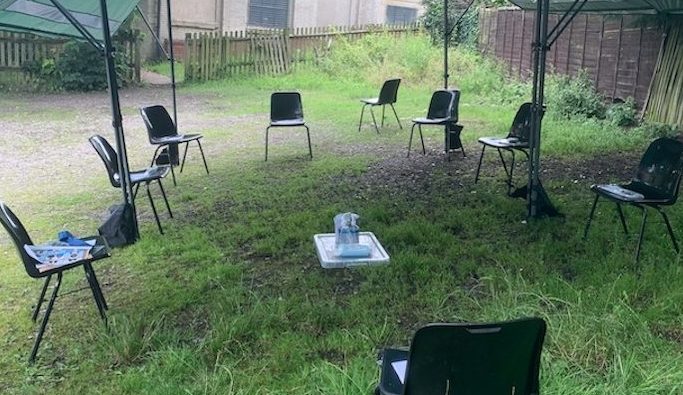 A photograph of the focus group set up, taken by Professor Linda Mulcahy and Dr Anna Tsalapatanis during their fieldwork
Methodological Musings >

Putting us in our Place: Recognising the Parasitic Tendencies of the Socio-Legal Researcher

A photograph of the focus group set up, taken by Professor Linda Mulcahy and Dr Anna Tsalapatanis during their fieldwork

Socio-Legal Studies has a long heritage of focusing on the ways in which the disadvantaged experience the legal system and the complicity of law in sustaining disadvantage. These  issues are at the fore of our current research on online justice and digital disadvantage and the reason we spent part of the summer of 2021 running focus groups with foodbank users.

We worked hard setting up the groups and ensuring that the participants were well treated.  When government restrictions during the pandemic meant that we were unable to hold the focus groups inside because of the risk to our research subjects, we purchased two gazebos and held them outside in a car park instead. When we were unable to offer the participants the refreshments budgeted for, we made up gift bags with food items we were told would be valued. We paid each participant with a £25 High Street voucher for around 45 minutes work. Finally, we designed the sessions to ensure that everyone’s opinion was sought out and valued. We did our job so well that the foodbank manager wrote to thank us afterwards for treating everyone with so much respect.  So why did the experience of conducting these focus groups leave us feeling dispirited, used, and a little shocked?

We experienced a number of problems running the focus groups. The people who took part were predominantly long-term users of the foodbank and led complex lives. A significant number were ‘repeat players’ in the criminal justice system. They mocked us for using a tablecloth to make the registration table look more attractive and criticised us for giving vouchers rather than cash. We were regularly asked to reserve places for friends who had not arrived, when we already had enough people present to run the next group. When one person turned up too late to take part we were sworn at. The conduct of several participants in the focus groups was equally as challenging. Two people drank alcohol throughout. Others left the group after 15 minutes because they had to be somewhere else or were bored and then  attempted to join other focus groups uninvited later on. Private conversations regularly broke out and made group discussion hard to manage. When we listened to audio recordings afterwards we were able to pick out some of these private conversations including one which concluded that our work was crap! In other instances, participants said nothing at all despite being regularly prompted for their views. Others asked to come to multiple focus groups so that they could get more vouchers. To top it all, when we were taking down the gazebos at the end of the day heavy rain fall soaked us and all of our equipment. We ended up laughing, slightly hysterically … at ourselves!

We don’t consider ourselves to be particularly naïve or arrogant. Both of us are experienced researchers who come from modest social backgrounds and have spent much of our research careers working closely with disadvantaged groups. We understand that for most of those taking part in the focus groups it was no more than a commercial transaction. Providing vouchers was not an act of kindness but an incentive to take part. We felt duly ashamed when one woman commented on the use she could have made of the money the ESRC were prepared to make available for one day of data collection; she had multiplied the number of focus group participants by the value of the voucher, and explained what a difference that amount of money would have made to her and her family.

For us, the experience has exposed that what often motivates us to undertake research is a romantic sense that we can make connections with people, change things for the better for them, and that they may even be grateful to us. But our research also has parasitic tendencies. We build careers on the back of empirical projects of this kind and benefit directly from the publications produced when we can’t be sure whether the research will have any social impact. The likelihood is that despite our best intentions it will probably change very little, and even then, we shouldn’t be expecting a thank you. Looking back, we would not have done anything differently during this first attempt at working with foodbanks but we do have reservations about whether focus groups would ever work well in this setting. We have a strong sense of unfinished business and plan to go back to the foodbank next year in order to explore better ways of engaging people in our research. In the meantime, we acknowledge that their impact on us has been greater than our impact on them and that the experience has quite rightly put us well and truly in our place.

Dr Anna Tsalapatanis is a Research Fellow working with Professor Linda Mulcahy and Dr Emma Rowden on the Supporting Online Justice Project, which is funded by the ESRC. Anna received her PhD in Sociology from the Australian National University. Her research interests include migration studies, citizenship as status, procedural justice, bureaucracy, and identity.