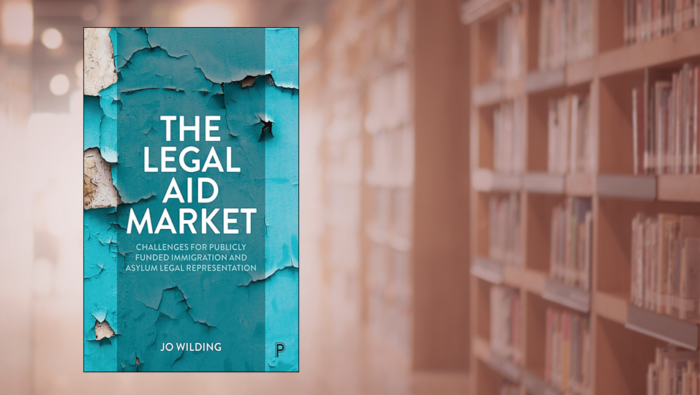 Re-Thinking the Legal Aid Market in Immigration and Asylum Representation

Jo Wilding’s The Legal Aid Market: Challenges for Publicly Funded Immigration and Asylum Legal Representation provides a much-needed insight into the operation of legal aid in asylum and immigration law in England and Wales, demonstrating that market failures produce formidable barriers to access to justice in the sector. There is a risk of getting bogged down in any number of specific difficulties with the system of legal aid in the sector, from auditing problems to the rates of remuneration offered for legally aided work, which threatens to produce a piecemeal and partial analysis. Wilding’s book employs a holistic perspective, however, that borrows effectively from economics to develop innovative insights into the often-dysfunctional dynamics between multiple parts of the system including government, regulators, and legal representatives. By employing concepts such as monopsony, adverse selection, and transaction costs the book not only provides a critique of the current system but introduces an incisive language with which to understand and communicate about legal systems.

While the book makes important conceptual contributions, it is also grounded in the concrete realities of legal representation. The book is extremely well-informed about the historical evolution of the provision of legal aid in immigration and asylum in England and Wales for example. Wilding also draws on an impressive range of empirical material gathered over six years of research and featuring detailed qualitative interviews with legal representatives. The book is based primarily on a three-year study of the immigration and asylum legal aid market (the Business of Asylum Justice Study), carried out between 2016 and 2018, involving 74 interviews and various case studies. This is complemented by discussions with policy officials as well as data from the earlier Quality of Asylum Legal Services provided by Solicitors Study (QALSS) which entailed over 150 interviews. The research basis of Wilding’s book has various strengths including the mixture of case studies used (private firms as well as not-for-profits, London and non-London firms, the publicly funded Immigration Bar and the now-closed Refugee Legal Centre); the focus on high quality providers which afforded deep insights into the difficulties of maintaining quality; the fact that Wilding discussed her 2019 report with policy makers and so was able to include some of their reactions in this book; and the breadth of perspectives that the QALSS offered, including the views of asylum seekers.

The introduction puts forth the central argument that the current system for procuring legal aid services in England and Wales is failing to secure adequate access to legal aid and adequate quality in immigration and asylum work. Reforms have been piecemeal and tended to shunt difficulties to other parts of the system by treating challenges in isolation.

Chapter Two provides an arresting history of the development of the relationship between legal aid, immigration law, and lawyers in England and Wales, discussing the policy debris left over from previous rounds of reform that clutters the regulatory landscape.

Chapter Three develops a nuanced and comprehensive picture of the complexities and shortfalls of legal representation for immigration and asylum, mapping shortages and setting out the different challenges that private firms, not for profits, the Refugee Legal Centre (later called Refugee and Migrant Justice) and the publicly funded immigration bar each faced as rounds of reform were introduced. A particularly striking aspect of the discussion concerns the influence of payments to providers in arrears when cases close, which introduced a wait of commonly two or three years for payment for work done.

Chapter Four uses the economic concepts of risk, transaction costs and economies of scale to paint a revealing picture of the difficulties of operating as a provider. The extremely demanding auditing requirements are time-consuming and can mean providers are not certain that they will be paid for their work, due to the risk of financial claw backs for technical non-compliance.

Chapter Five provides an innovative perspective on ‘demand’ for legal representation, deconstructing demand into different forms. ‘In-case demand’, for example, is driven by developments of cases already taken on. An important form of demand, Wilding argues, is ‘failure demand’ which arises when parts of the system fail to operate in the ways that are intended, such as when the Legal Aid Agency fails to regulate the sector effectively. By deconstructing demand, Wilding introduces an invaluable framework for critically appraising the system.

Chapter Six deploys the concepts of advice droughts and deserts. Wilding takes advice ‘deserts’ to refer to areas in which there are no legal aid providers at all, while advice ‘droughts’ refer to areas where there appears to be supply, but in reality this supply is not forthcoming, for instance because of a lack of capacity. The Chapter highlights the difficult position providers are often in when they are required to prioritise certain types of cases (vulnerable groups, for example, or detention cases) and turn others away.

Chapter Seven questions the extent to which legally aided asylum and immigration legal representation operates as a market despite the policy rhetoric. It demonstrates how some key features of markets such as choice, voice, and the opportunity to exit the market are severely limited in this area. As well as concluding, Chapter Eight provides indispensable critical commentary on recent changes to the appeal process in England and Wales, introduced since 2019.

Placing Wilding’s analysis in an international context would be an interesting exercise. This could allow for an exploration of the extent to which barriers to access to justice discussed in the book are generalisable elsewhere, and to what extent aspects of the global economic system, like trade and colonialism, have shaped the phenomena Wilding discusses. This is just one of several ways the book could prove useful to future analysis, applications to other areas of legal aid provision being another. In general, the book is an extremely important contribution, written by an insider who is both well-informed and conceptually innovative. It will make engaging reading for the non-specialist and should be required reading for relevant policy makers.

Nick Gill is a Political Geographer at the University of Exeter. He has conducted research on justice and injustice in asylum adjudication for several years and published on European asylum law and procedure. His most recent book, co-edited with Anthony Good, is Asylum determination in Europe: Ethnographic perspectives (Springer Nature, 2019).