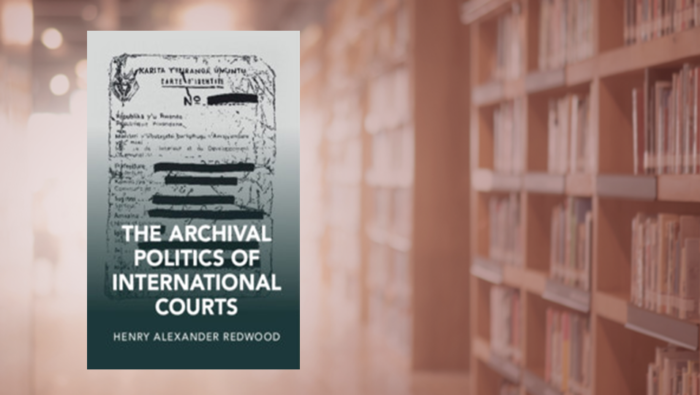 Reading the Archives of International Law

Recent critical attention to the legal archives produced by courts, not as neutral sources of historical information but as sites of material practices that produce knowledge, has resulted in valuable legal scholarship that brings law into dialogue with archival and documentary theory. While some work has attended to courts of national jurisdictions, there has been little attention to the copious archives produced by international courts. In The Archival Politics of International Courts, Henry Alexander Redwood focusses on the archive of the International Criminal Tribunal for Rwanda (ICTR), established by the United Nations Security Council with a mandate to prosecute those responsible for the genocide that occurred in 1994 in Rwanda and neighbouring countries. As Redwood explains, this was a horrifying campaign of extreme violence perpetrated largely by the Hutus aligned with the ruling coalition, against the Tutsis. However, the origin and reasons for the violence was far more complicated than a simple case of ethnic conflict, and many argue that it involved a level of negligence on the part of the United Nations, which ‘stood idly by whilst the massacres of up to one million Tutsis and “moderate Hutus” occurred’ (p.34).

Redwood focusses on the archives produced by the trials in three cases: Akayesu, Cyangugu, and Gatete, each involving defendants tried at different times across the duration of the ICTR’s existence. Using a Foucauldian-inspired approach, the author carefully examines the legal records produced by the court proceedings as dynamic sites of knowledge production, where contestations of what should or should not be permitted into the archive result in ‘certain imaginings of community’. In Chapter 3 (with the Bourdieu inspired title of ‘The Force of Law’), Redwood examines how legal and juridical discourse determine the account of violence that is recorded in the archive and contribute to the construction of legal actors as perpetrators or victims of violence. Here, the author reproduces key testimonial extracts which effectively demonstrate his argument that in emphasising the actions of perpetrators as conscious and rational actors, the archive produces an understanding of the genocide as carefully planned and organised (p.68-9). Victims, on the other hand, were required to be members of a particular political, national, ethnic, religious, or racial group (under Article 3 ICTR Statute) and a civilian or prisoner of war (Article 4 ICTR) (p.74-75). This resulted in an understanding of the conflict where victimhood was attributed to Tutsis alone and Hutus were portrayed as a group of perpetrators.

Importantly, in the absence of paper trail, the Tribunal relied substantially on the testimony of witnesses. In Chapters 4 and 5, Redwood draws upon a framework of enunciative modalities to examine how the witnesses’ testimony contributed to the archive, often taking an active role in shaping and resisting the established narrative of violence. For example, during the trial of Akayesu, two witnesses testified to the occurrence of rape, a crime that was not included in the indictment. This agency on the part of the witnesses ultimately resulted in the establishment of a special investigation unit tasked with investigating sexual violence and an increasing volume of evidence relating to sexual violence included in the ICTR’s archive (p.87-88). In this way, witnesses’ testimony contributed to and shaped international humanitarian law (p.107). In Chapter 5, Redwood argues that over time, the ICTR archive shifted from a broad restorative concept of justice to a more strictly retributive model. This shift, he claims, occurred for two reasons: through the creation of a more established jurisprudence of substantive and procedural international criminal law, and as a result of interventions by external actors, including the United Nations Security Council and the Rwandan Government.

Redwood’s attention to the archival construction of individual responsibility leads to an important argument about the eradication of the responsibility of international actors during the genocide. By focussing on individuals, he reveals how these identities were discursively gendered, with feminine subjects identified as civilians and associated with victimhood and passivity. It also led to a hierarchy of victimhood, with gender-based violence seen as less significant than other crimes. Redwood effectively demonstrates this argument with an example from Cyangugu, where a reference to sexual violence by a witness was erased from the archive upon request from the defence (p.150).

The book is a detailed and engaging analysis of the archives produced by international courts that makes an important argument about the discursive construction of justice. It is a valuable contribution to the burgeoning critical scholarly literature on legal archives that extends the field into the courts of international law. Through close attention to the records of one important tribunal, the book also demonstrates the potential for further analysis in relation to other international legal contexts.

Trish is an Associate Professor in the Faculty of Law at the University of Technology Sydney. Her research is concerned with how, and on what basis, legal decisions are made. It focuses on two areas: analysis of legal decision-making and court processes; and evidentiary assessment, including theories of the documentary form in law.