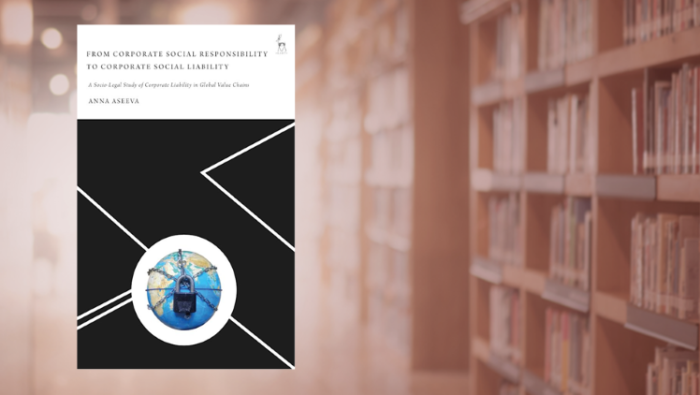 The ‘Economic’ and the ‘Legal’ in Corporate Liability and its Negation

Anna Aseeva’s From Corporate Social Responsibility to Corporate Social Liability: A Socio-legal Study of Corporate Liability in Global Value Chains is a revised version of the thesis for which Aseeva was awarded a PhD in 2016 by Sciences Po. In it she argues that transnational corporations (TNCs) now enjoy ‘virtually limitless corporate power’ (p.3) because, in the economy of ‘global, post-colonial capitalism’ (p.62), their operations are largely conducted through ‘global value chains’ (GVCs) (pp.35-43) which are not subject to meaningful legal control.

Your reviewer, who thereby shows his age, finds it striking that the possibility of conventional national company law being the basis of such control is regarded as having such little plausibility as to be not really taken seriously (Ch.3). Aseeva’s criticisms are of transnational corporate social responsibility (CSR), which she claims has experienced a ‘rise and fall’ (p.54) that has left it impotent. She provides a very learned account of this rise, manifested in the huge number of international norms and standards that have been set for transnational business. The fall has been manifested in a growing realisation that CSR has left major ‘regulatory and governance gaps’ (p.211), and that the mechanisms for dispute resolution and the imposition of liability conscious of their wider social dimensions are very unacceptably weak. Aseeva illustrates her point by reference to what may be the worst garment factory accident in history, the 2013 collapse of the Rana Plaza in Dhaka, after which CSR did not lead to the imposition of liability for the death and serious injury of thousands upon the transnational buyers; this, Aseeva argues, imposed the competitive pressures ultimately responsible for the extremely unsafe working conditions (pp.59-62).

After what, it must be said, sometimes threatens to be a counsel of despair, Aseeva identifies ‘a way forward’ (p.215) by replacing CSR with a law of ‘corporate social liability’ (CSL) which would sheet home all the social consequences of the operation of GVCs on TNCs, which should ultimately be viewed as public rather than private organisations because they are ‘charged with … public goals’ going far beyond private company and contract law (p.69). A reviewer has to be wary of turning to the conclusion of a book because this can give the wrong impression of the way the review was conducted, but in the last sentence of her book Aseeva says that ‘It is probable that, at present, capitalism cannot be eliminated, but it must be domesticated’ (p.221). This so captures the tone of her argument that it must be quoted.

This book is a sophisticated addition to what Socio-Legal Studies has to offer to the formulation of legal policy towards the harmful effects of TNCs. It very interestingly suggests the gains in theory and policy that may be made from giving GSCs, so far largely a feature of business literature, such prominence in legal discussion. More generally, this book may be contrasted, as indeed Aseeva does (p.58), to Anna Beckers’ 2015 Enforcing Corporate Social Responsibility Codes, which has, as a practical matter, the same goal as the book under review, but places a reliance on private law enforcement which it is Aseeva’s purpose to criticise. Your reviewer confidently expects that Aseeva’s insistence on the public nature of CSL will receive wide, sympathetic discussion.

But this book’s very sophistication raises the acute conceptual problem inherent in the separation between ‘economic power’ and ‘legal regulation’ which is essential to its argument. The many occasions on which it jarringly emerges that economic power must be vested in legal institutions are to Aseeva’s credit. As is her seeing that ultimately this is not a matter of the ‘Washington Consensus’ law she discusses (pp.28-34), but of ‘separate legal liability and limited liability’, for these are the essential foundation of the ‘economically dependent but legally independent’ structures used to shield investors and owners from liability (p.67). However, far from representing market order, general limited liability was created by the most important state intervention, after fiat money, ever made in the capitalist economy, and was bitterly opposed by contemporaneous proponents of the market. Aseeva only very inadequately perceives this (p.65) in the course of her passionate argument that the economy she describes must be radically changed. But we shall make little progress if change is seen as the ‘legal’ eliminating ‘the economic’, unless we can deal with the fact that the existing ‘economic’ exists precisely because of a set of rights of ownership and transfer created by the national and transnational ‘legal’.

David Campbell has since 1985 taught at a number of British universities and in Australia, Hong Kong, Japan, New Zealand, Spain and the USA. He is now a Professor in the Lancaster University School of Law, UK. His main research interests are in the law of contract and in regulatory theory.