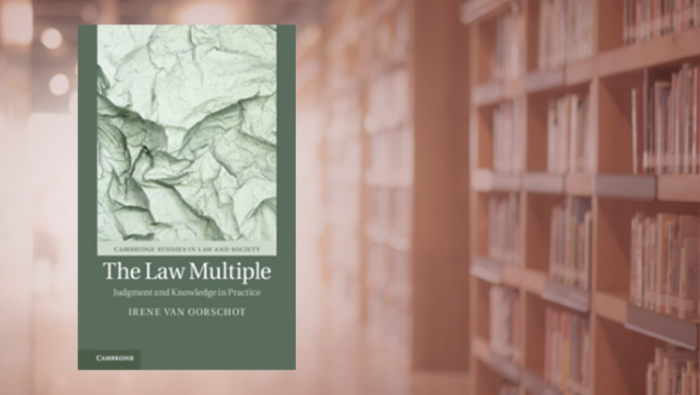 The Making of Truths in Dutch Criminal Court

The Law Multiple: Judgment and Knowledge in Practice by Irene van Oorschot is an absorbing and thought provoking read, written at a high level of sophistication. The book is an account of a fascinating study of judicial ‘case-making’ in Dutch criminal courts. It makes a valuable contribution to the growing socio-legal literature on judgecraft – attempts to understand how judges navigate their way through the multiple contexts of each case –legal, social, cultural, moral, psychological, material, and more.

Van Oorschot has gained extraordinary access to the judiciary at work and made full use of it. For almost two years she was able to ‘shadow’ a set of judges, observe note-taking and other techniques they used to make sense of the cases, and to scrutinise more than 250 criminal case files. She analysed the division of labour between the judges and their clerks and sat in the courtrooms, properly dressed in robe and bib. Finally, she gathered the judges’ reflections on their cases, both before and after the trials. For some reason, van Oorschot felt the need to use a new label, ‘a Pragmatic Respecification’, to describe her research approach. That method, the scrutiny of ‘irreducibly local and concrete practices’ (p. 169), is something that I myself, as a socio-legal scholar, would describe as a well-executed Grounded Theory approach.

The author invites us to see how judges ‘visualise’ a case and build up a comprehensive picture that includes the life circumstances and personality of the defendant. She explains their skill in assessing whether a defendant’s remorse is genuine, developed by professional training plus years of experience. We gain insights into the discomfort judges felt as they were obliged to move from paper to digital files, and into that transition’s impact on how they ‘process’ the file.

However, the central focus of the research is the case file itself. In conversation with Latour, van Oorschot explores the multidimensional character of a typical file, explaining the stories that are recorded and those that are left out, the logic of evidence production, and the complexities arising from the time shift from the there-and-then of an event to the here-and-now of the trial. The author provides nuanced and in-depth analysis, backed by vivid examples.

The book is partly a rejoinder to ‘the Leiden report’ in which a group of sociologists used quantitative data to show that in the Dutch criminal courts non-Dutch defenders were treated more harshly than natives. The publication was politicised and was effectively used to accuse the judges of racism, triggering an angry response from the judiciary. This incident prompts van Oorschot to wonder whether social science is properly equipped to understand legal practices. Examining the design of the Leiden study and contrasting it with her own research, van Oorschot exposes the various contrasts between the aims and means of constructing knowledge typically used by sociologists and the judiciary. She then extends this analysis into arguable claims about the inability of social science to penetrate the legal domain, before concluding that social science lenses are inappropriate to explain legal practices on the ground. In doing so, she makes some puzzling statements, such as that the law’s promise of impartiality is about the equal treatment of cases and not of social groups. Should we therefore assume that non-Dutch people have more criminal tendencies than Dutch natives? Or perhaps we can use van Oorschot’s own research to suggest that judges learn better to interpret body language, storytelling, and expressions of remorse when they are dealing with defendants from their own culture? Maybe they are tuned to ‘visualise’ some cases better than others? If so, then it has nothing to do with racism but it does reveal yet another, cultural difficulty in the practice of judgecraft. Besides, the reader remains wondering, where does the author position her own research, if not in social science?

However, the most problematic sections are in the first two chapters, where the author critiques Jurisprudence and Social Theory scholars, arguing that they ask the wrong questions about law and that the only way to understand law is to explore the ‘concrete’ by ‘pragmatic respecification’. This bridge between the author’s theoretical contemplations and her actual research, although elegantly constructed, is wobbly and in places uncomfortable to cross, but even more importantly, unnecessary for an otherwise excellent study of judicial decision-making in criminal courts.

Marina is a sociologist who specialises in comparative legal cultures, the post communist transition and the impact of development issues on the rules of law. She has conducted empirical research in many European and Central Asian countries.