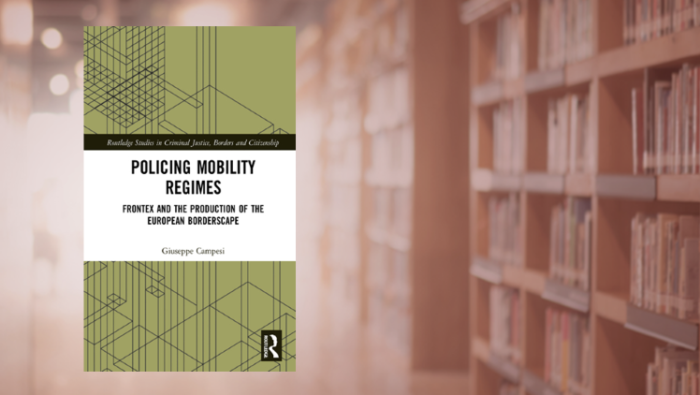 The Many Tensions at the Heart of European Border Management

Giuseppe Campesi’s book Policing Mobility Regimes: Frontex and the Production of the European Borderscape captures the many tensions and potential contradictions at the heart of European border management. Of key concern is Frontex, the EU executive agency established some 16 years ago, and the processes, turning points, and key events that created and shaped it. Campesi analyses these developments using a wealth of information: statistical, theoretical, and legal, among others.

Perhaps the key idea that pulls this book together is the discussion of ‘antinomies’, a word which the author uses to describe the various tensions that have been inherent in Frontex’s development and functioning. While I would have preferred to define these antinomies in more pedestrian terms such as paradoxes or tensions, he is right in identifying these core contradictions, and the roles they play. Two in particular are highlighted: the tension between the supranational and the intergovernmental, and the tension between the protection of borders and the protection of human rights.

The book itself is divided into six substantive chapters, each with four subsections. Each chapter deals with a slightly different aspect of the development of the European border regime. The first chapter theorises the border and its relationship with security, concluding in highlighting how securitised borders can act as an instrument of discrimination. The second chapter considers the origins and nature of the current EU border regime. More specifically, it introduces the complex dialectic that emerges as a consequence of the Schengen Agreement and its implementation: the need for an external ‘closing’ in order to facilitate the internal ‘openness’ of free movement. In doing so it engages with a significant analysis of documents and regulations.

A genealogy of Frontex is developed in the third chapter, highlighting the origins and evolution of the two aforementioned key ‘antinomies’ or tensions. The fourth chapter highlights the ways in which Frontex is organised, and the actions it is tasked with. This involves an analysis of the agency’s power, including the possible evolution of a supranational border force, as well as a consideration of its democratic quality. The fifth chapter engages with how the border is policed and the risk management role that Frontex plays, especially in terms of its knowledge-based control processes. This chapter also raises concerns that with the introduction of smart borders and other more technology driven processes, there is a risk of further transforming borders into a technology of discrimination.

The final chapter is by far the longest, providing an overview of how the EU’s migration control policies have been externalised, then analysing the local border control regime in the three sections (the Western, Central, and Eastern regions) of the Euro-Mediterranean area. From these three cases, it then highlights Frontex’s willingness to don the garb of a humanitarian actor, while still being very security driven. It also shows how these local cases have come to influence broader policies. These two latter chapters include a wealth of information drawn from Frontex reports and programming documents, along with the reporting from NGOs, to help create a multifaceted illustration of these actions.

Overall, the legal, geographical, and political approaches engaged with within the text are well woven together, and Campesi is also very successful at pointing out areas of divergence or disagreement. As someone whose personal and research interests focus on the impact that these organisations and policies have on individuals, I felt the inclusion of discussions around how borders function to create social hierarchies around different mobility entitlements, was both very important and well handled. I was also glad that this book included some discussion of the ways in which the move towards more technological and algorithmic security processes may work to exacerbate existing inequalities with little right to recourse. The text’s key contribution is its ability to weave through such a diverse range of approaches and sources – empirical, theoretical, and otherwise – in contrast to the more singular approaches of others dealing with these topics.

As an organisation that describes migrants as being variably ‘a risk or as at risk’ (p.265), the tension between the protection of borders and the protection of human rights in both rhetoric and action will continue to be an issue for Frontex. As the book explains, the future of the ‘European borderscape’ still remains to be seen, but Campesi’s text is a good resource for those wanting to better understand the many tensions, contradictions, and crises which have led to where it is today.

Dr Anna Tsalapatanis is a Research Fellow working with Professor Linda Mulcahy and Dr Emma Rowden on the Supporting Online Justice Project, which is funded by the ESRC. Anna received her PhD in Sociology from the Australian National University. Her research interests include migration studies, citizenship as status, procedural justice, bureaucracy, and identity.