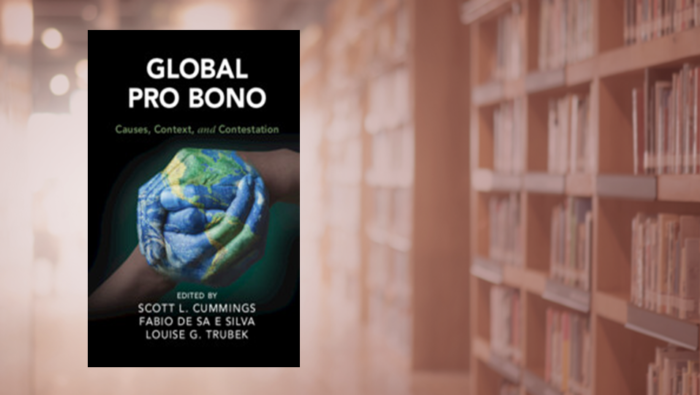 What is Global Pro Bono About?

As suggested by its title, Global Pro Bono: Causes, Context, and Contestation explores the transnational roots of pro bono, as it is currently dispensed worldwide. In their opening chapter, editors Scott L. Cummings, Fabio de Sa e Silva, and Louise G. Trubek summarise their line of inquiry by asking ‘what is global about pro bono and what is global pro bono about?’.

To answer these questions, the editors put together sixteen contributions, emanating from twenty-eight scholars and practitioners across five continents. This editorial tour de force results in an exceptionally rich dataset displayed on a country-by-country basis throughout the chapters. A curious reader will be able to glean specific information about the role of woman lawyers in promoting pro bono in Portugal, the recent achievements of the Nigerian clinical legal education movement in delivering free legal advice, the differences between how Singaporean lawyers have expanded civil and criminal pro bono, and so forth.

Beyond the abundance of empirical material, one of the strengths of this book lies in the editors’ relentless effort to define the concepts they introduce. Let us take their definition of global pro bono. Pro bono refers to an array of legal services provided for free by lawyers to individuals or groups that could not afford to pay. However, the editors acknowledge that pro bono remains a ‘terrain of struggle, not a set of stable ideas and practices’ (p.4). Taking this into consideration is especially important, they argue, in the age of advanced globalisation, where both the meaning of this new private legal volunteerism, and its degree of institutionalisation, differ from one country to another. Consequently, a comparative and transnational approach seems to be particularly called for. This book not only documents the similarities and dissimilarities in ‘the origins, features, and impact of pro bono activity’ (p.5) across the globe, it also sheds light – although not systematically – on the channels through which international actors (law firms, NGOs, public interest networks) spread and shape pro bono practices, be it with international forums, reports, donations, or rankings.

Despite an overall lack of cross-fertilisation between the chapters, the country-based contributions remain centred upon one major framework, that of hybridisation. It refers to the incorporation of an American model of legal services provision into local institutional environments. For instance, the chapter on France investigates the ‘resistances, appropriations, and realignment of interests and hierarchies’ (p.319) induced by the diffusion of new practices by big law firms based in Paris, while linking those with the longstanding tradition of generosity amongst the French Bar. Conversely, the piece about Chile, Argentina, and Columbia indicates that pro bono as a legal transplant might not always take root; some local factors might hinder its development – the asymmetrical distribution of pro bono between elite law firms’ partners and younger lawyers being one of them.

Hybridisation as an all-encompassing framework is undeniably effective, on the strict condition that that it does not overlook infra-national mechanisms allowing for pro bono practices to be incorporated. Fortunately, the editors’ approach is firmly processual. Their emphasis is not merely put on causes, but on context and contestations as well. To begin with, global and local factors accounting for the rise of pro bono are reviewed: among others, the growth – in number and size – of Big Law firms operating internationally since the 1980s; the emergence of so-called progressive neoliberalism; the slashes on State-funded legal aid since the 1990s; the advent of corporate social responsibility and its new obligations. At the same time, contextual issues such as the snags between legal aid and pro bono politics, the progressive – yet cautious – ethical codification by local Bars, or the identification of individual and organizational clients are also compellingly addressed.

Anyone interested in Socio-Legal studies at large should find in this book a certain degree of satisfaction, for it covers familiar topics such as legal services provisions, law and globalisation, or lawyers’ ethics. That being said, it does so by fully immersing the reader in a remarkable variety of legal and geographical settings – and this is perhaps where the sheer ingenuity of this book ultimately lies.

Pierre-Louis Sanchez is a PhD student at Université Paris Cité. His thesis focuses both on the professional structuration and the everyday work of court clerks (“greffiers”) within the French judiciary. Pierre-Louis’ research interests include legal aid politics, law and gender, and the legal profession.