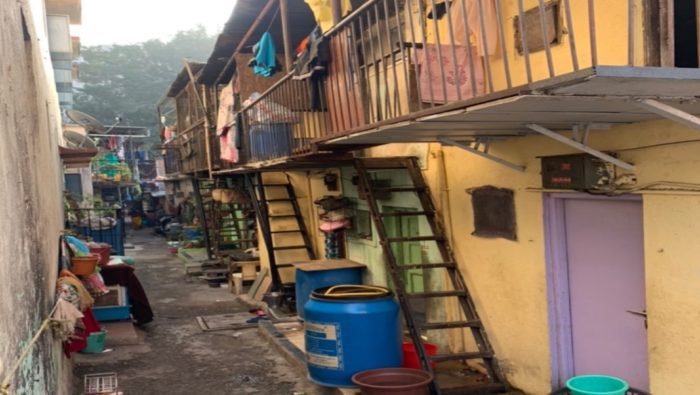 A photograph taken by the author, during an ethnographic observation in domestic workers’ housing settlement. This picture is taken with the permission of the people observed.
Methodological Musings >

A photograph taken by the author, during an ethnographic observation in domestic workers’ housing settlement. This picture is taken with the permission of the people observed.

When I began my fieldwork, I had expected that being a sympathetic researcher interested in the life of domestic workers was enough to build trust.  Even after much preparation and prior knowledge of my field, my first fieldwork experience was difficult in ways I had not anticipated. I was forced to reflect on the ways in which the research process can re-construct the very hierarchies that exist within the labour market I was trying to study. In this post, I discuss some lessons learnt and Socio-Legal insights gained through encountering the empirical difficulties that arise from class divisions.

In India, it is common to evaluate which class domestic workers and employers belong to by a quick screening of their clothes, their behaviour, or way of talking. During fieldwork, I am commonly placed as belonging to the class of employers by my participants who are domestic employees. To the domestic employees I hoped to work with, who feel the burden of being from the lower socio-economic strata, I became a person belonging to this ‘other’ class; distant from experiences of subordination and segregation. This has meant that I face numerous barriers in gaining the trust of my participants, in often unexpected ways.

Insecurities around class in India are prevalent in many ways and are felt most prominently by those who routinely experience marginalisation. An early experience of these barriers came when I asked to interview a domestic worker in her home. She denied, stating that her home may be ‘dirty’ for me and that I may have no good place to sit. As a researcher, this was my first encounter with the socioeconomic stratification that resulted in workers’ insecurities about their own homes. In this, and other ways, class became a fundamental feature of my initial encounters with workers and made me acutely aware of my position within the class structures, to an extent I had not been prepared for.

In my study, most domestic workers considered themselves an insignificant part of society and their labour market an unlikely site for research. This led to questions about my work and workers’ willingness to participate. This, workers later confided to me, largely stemmed from mistrust towards me, rooted in personal experiences with employers who have consistently reproduced class inequalities. As a result, gathering a reliable sample of people to interview was a challenge. It became necessary to use a snowballing technique; getting in touch with domestic workers who could introduce me to their friends. I got introduced to Asha (name changed) through an employer I had explained my research project to. Asha and I realised that we had known each other previously through another employer she had worked for. This familiarity generated a connection and Asha became key in introducing me to her friends and accompanying me on a visit to her housing settlement. However, whilst issues around trust and class became more relaxed when I met my respondents through her, they did not completely disappear.

Even though my participants and I shared a trusted contact, in the initial stages of research, the ‘otherness’ in me persisted for workers. They continuously placed and saw me with suspicion, questioning if I were seeking information for the benefit of their employers. During interviews, several answers to my basic questions were met with resistance or what seemed like distrust. For instance, whenever I asked them about their relationship with their employer, interviewees would often begin by stating that they were content at work. Having spoken to other workers, I knew this was not entirely true and after probing, they usually opened up about how they felt ‘low’ at their workplace. Building trust with participants took me much longer than I anticipated, with most workers opening up to me only after numerous meetings.

Workers would often spatially segregate themselves from me during interviews. They would sit on the floor or on a lower platform while talking to me, mirroring the way they interact with their employers. This spatial distance became disturbing to me. To overcome the divide, I tried to create bonds over a cup of tea before starting the interview. Explaining to them why my study was significant and how they could bring their life stories to a larger audience through my work, proved helpful. Honesty about my work, sharing realistic outcomes of the research, being empathetic to issues my participants’ were facing, compassionate listening, and communicating my understanding of how difficult their life could be were all vital in forming relationships built on trust. Even rescheduling the interviews when interviewees felt overwhelmed became a way of showing care to my participants. It also became a way of expressing genuine interest, connection, and humanity, aspects that most of the women I spoke with lacked in their everyday lives.

At times, listening to domestic workers’ stories often left me feeling emotional and lost; navigating feelings of class difference and the time it took to build fragile connections of trust and understanding was disorienting. Allowing enough time for fieldwork, including these moments of loss, disorientation, and where it felt as if nothing was happening, was imperative to building these relationships of trust. As Gita Gill notes, the importance of pacing connections with participants in order to encourage trust, is especially true in Socio-Legal work with marginalised communities, where the distance between the researcher and the respondent plays a considerable role. Despite these challenges, the possibility of making small differences through the care I showed and sharing the stories of courage and everyday struggles of domestic workers with a larger audience, left me with a feeling of fulfilment that reaffirmed the power of Socio-Legal research.

Anwita Dinkar is a second year PhD student at the Centre for Research on Social Inequalities (CRIS), Sciences Po. She has a background in law and sociology. Her research focuses on the different ways in which people can access the justice system with special reference to legal pluralism, legal intermediaries, and digital activism.